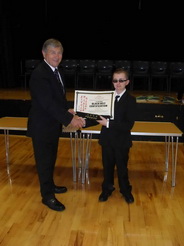 Some of you that attended the grading may have wondered what was going on, some of you may have wondered why for weeks we had be asking (nagging?!) for everybody to attend and show their support at the recent colour belt Tae Kwon-Do grading held in South Molton.
Well there was a reason and a very good reason I felt.
Nick Day has been a member of North Devon Tae Kwon-Do since 2006 when myself and Mr Richard Edmeads held a series of TKD taster sessions in Torrington Community College. Nick was hooked from the outset. He quickly joined North Devon TKD and there were not many weeks that passed by without Nick not only attending but also asking many probing questions that sent us instructors running for our TKD encyclopedias!
Those of you that dont know Nick may wonder why you have never seen him in a class in the year or two that you have been members. Well unfortunately Nick was diagnosed with two brain tumours. This put a temporary end to his TKD training as I’m sure now you could understand.
Well it just so happens that Nick is a fighter in more than one sense of the word. Nick decided that he wanted to fight his tumours from stopping him doing what he enjoys. So here he is Mr Nicholas Day first Dan Black Belt in Tae Kwon-Do!
Nick knew nothing of what was due to be awarded to him on the grading night. I had discussed his situation with his family and then contacted Master Michael Dew who for those of you who don’t know is Vice Chairman of the TAGB. Master Dew agreed that Nick deserved his promotion, after all Nick had already learnt his Black Belt grading syllabus before being diagnosed. Master Dew took Nicks situation to the national meeting of the TAGB committee where they too agreed and voted unanimously that Nick deserved his promotion.
So there you have it, Nick is North Devon Tae Kwon-Do’s latest black belt, one of only 20 people that have been awarded their Black Belt this way nationally within the TAGB in it’s almost 28 year history.
Well done Nick! 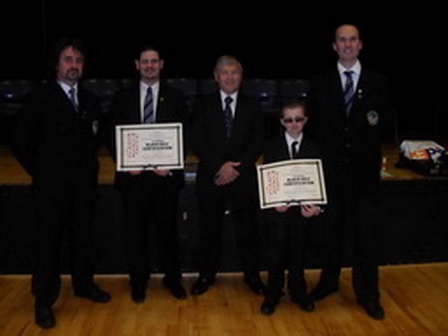